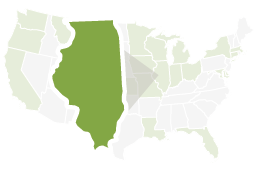 The 5Essentials Survey is a research-based diagnostic survey that provides data and insight into schools’ organizational strengths and areas of opportunity across the five essential factors for school improvement: Effective Leaders, Collaborative Teachers, Involved Families, Supportive Environment, and Ambitious Instruction.

From its roots in rigorous education research on the factors that matter most for school improvement to its incorporation in the state’s formal accountability plan, the 5Essentials has played an important role in Illinois’ efforts to promote sustainable school improvement and improve student learning. In 2019, the state elected to continue its partnership with UChicago Impact to administer the 5Essenitals statewide in the years ahead.

The State of Illinois’ decision to implement the 5Essentials was largely influenced by the research behind the survey framework. In 2010, The University of Chicago Consortium on School Research (UChicago Consortium) found:

The UChicago Consortium’s research also showed that a persistently low score in even just one of the five essentials reduced the likelihood of improvement to less than 10%.

In 2011, Illinois passed bipartisan legislation that required the Illinois State Board of Education (ISBE) to adopt a survey of learning conditions that would give teachers and students an opportunity to provide feedback on their school’s environment. After a broad search for a validated survey instrument that would fulfill this new requirement and provide schools with meaningful information that could help guide school improvement planning, ISBE recommended implementing the 5Essentials Survey statewide in the 2012- 2013 school year. Also, in 2013, Illinois Governor Pat Quinn proclaimed February 15 as “5Essentials Day” to encourage students, teachers, and parents statewide to participate in the 5Essentials Survey.

During the 2012-2013 school year, Illinois begins administering the 5Essentials in over 3,000 schools across the state.

While the original intent of providing schools with 5Essentials data was to expand the conversation around school improvement and gather feedback from teachers and students about their learning environments, the state also saw an opportunity to make schools’ performance on the 5Essentials more transparent. In 2013-14, Illinois began publicly reporting 5Essentials Survey results on Illinois School Report Cards and schools have since made impressive gains on the 5Essentials.

Since the statewide implementation of the 5Essentials, Illinois has maintained a commitment to expanding the conversation around school improvement and using the 5Essentials as a framework for building educators’ capacity for driving sustainable improvement in schools and student outcomes.

I fundamentally believe that capacity building is the key to driving improvement. That we have to increase everybody’s ability to serve children and support families and I would say that’s what the 5Essentials does for our schools. —Tony Smith, Illinois State Education Superintendent, 2015-2019

In 2017, the state made 5Essentials Survey response rates an accountability metric within its Every Student Succeeds Act (ESSA) plan. Illinois was one of only three states that cited a culture and climate survey in their ESSA plan as a formal accountability measure for school quality and student success. Illinois chose to hold schools accountable for 5Essentials response rates as opposed to survey measure outcomes under ESSA

as a way of increasing survey participation across the state with the intent to provide school leaders with an important set of data as a starting point for improvement planning.

Since the implementation of Illinois’ updated ESSA plan, the state has seen a significant increase in survey response rates. During the 2018-19 school year, the student response rate was 86% versus 76% the year prior.

In addition to using 5Essentials Survey response rates as an accountability mechanism, schools and districts across Illinois have utilized 5Essentials Survey data to drive and foster dialogue around school improvement planning. For example:

Understanding the Art and Science of STEP: Frequently Asked Questions

A child's education isn't a dress rehearsal. We have one chance to get it right and the 5Essentials Survey helps keep us focused while holding us accountable.